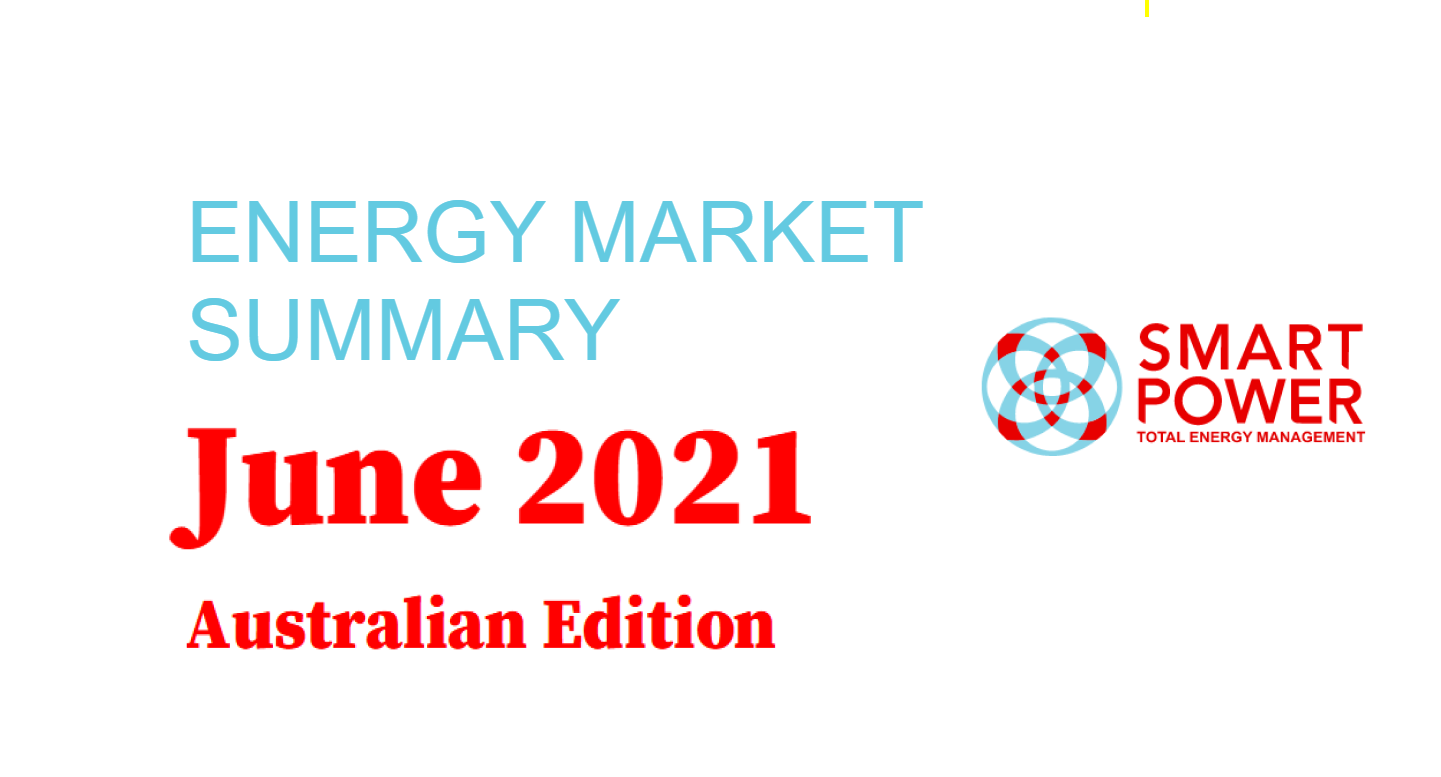 Spot prices increased significantly in all States in June, from already high levels in May. Average spot prices in June were 6 times what they were in June 2020 in QLD, 3 times in NSW, 100% more in VIC and TAS and 50% more in SA. This was largely due to the explosion at Callide power station in late May, the impacts of which were felt throughout most of June, particularly in QLD and NSW. As Callide units were gradually returned to service through June, average spot prices gradually reduced. The table below shows the average spot prices for the month and also the average peak price. The significant divergence between average spot price and average peak price highlights the impact the outage had on volatility with the more extreme pricing typically occurring during morning and evening peak periods. The other significant market event occurred in Victoria after flooding that occurred in the La Trobe valley resulted in Yallourn power station operating at a reduced capacity due to concerns that the coal mine that supplied it may be breached and flooded. This resulted in elevated spot market prices across VIC, TAS and SA as more expensive plant had to be dispatched in its place.

The following graph shows the daily Average Spot Price across the last 6 months, with the current month highlighted for clarity. The increase over the month compared to previous months is clear to see.

Total generation for June increased by 4.6% from May levels as demand increased with the cooler weather across all eastern States increasing heating loads.

Solar output declined by 27% as we moved into the shorter, cloudier winter months, but this was largely offset by an unexpected and welcome 5% increase in wind (unexpected as winter months are typically calmer months). Hydro and gas output increased markedly in June making the most of the higher prices this month brought on by the outage at Callide Coal-fired Power Station, and the reduced capacity at Yallourn.

Water Energy storage levels in Hydro Tasmania’s system increased mid-June as high inflows entered the catchment area, but then decreased in the second half of the month as hydro generation was pushed hard to make the most of high wholesale prices in the NEM. Storage ended the month close to the 5 year average at 5,259GWh (up 75GWh over the month) or 36.4% of full storage.

Snowy Hydro’s storage levels dropped for the 8th month running finishing the month at 14% below the 5 year average and approaching minimum levels seen in the last 5 years. Again releases for hydro power stations generating hard to make up for outages at coal-fired stations, more than balanced inflows, resulting in the drop in storage over the month.

July to September rainfall is likely to be above median for most of Australia, though areas in western WA, coastal south-east Australia, and western Tasmania are tending towards a more neutral rainfall outlook. July and August rainfall show a similar pattern though the chances of exceeding the median are not as high in August.

Maximum temperatures for July to September are likely to be above median for the northern tropics and parts of south-west and south-east Australia, while below median daytime temperatures are more likely for a broad area extending from SA across western NSW and into southern Queensland. July and August show a similar pattern, although July is likely to be below median more broadly for much of the southern two-thirds of the mainland.

Large parts of the eastern Indian Ocean are warmer than average, and a negative Indian Ocean Dipole event is looking increasingly likely, which can favour above average rainfall for parts of Australia. The El Niño–Southern Oscillation is currently neutral.

Renewable generation (wind and solar, including roof-top solar) reduced again in June. Wind generation increased slightly but this was more than offset by the decline in solar generation as we moved into shorter, less sunny winter days. The following chart shows the monthly energy produced for each of these renewable types since 2017.

Total generation from these 3 sources was 3,136 GWh in June – 6.3% down on last month, and well below levels seen over the last 9-10 months. It was however still 24% more than June last year.

CY22 contract prices increased again during June as volatility continued in the Wholesale market and the impact of a potential long term outage for the Callide C unit that exploded was factored into Futures pricing. CY22 prices are now up to 50% above their February lows.

CY23 and CY24 contracts were reasonably static across all States during June, apart from SA which increased more than 10% in both years.

Prices rose during June by a staggering 42.6% to $10.02/GJ at the Wallumbilla Gas Hub – the biggest monthly increase since December 2016, and the highest price since November 2018. Part of this increase was undoubtedly down to the increased demand for gas for generation, but part would also be due to international prices for gas as discussed further below.

Gas storage is an important factor in the gas market, especially heading into the colder winter months in the southern States. The main storage facility at Iona was drawn down hard during June to provide for increased gas generation, as well as typically higher winter heating demand. It ended the month at 14 PJ – a 36% drop and is now well below its lowest point for this time of year in recent years – as shown in the following chart.

Like gas, the price of coal can flow through and have an impact on the electricity market. Coal, especially black coal, is often the marginal generator in a number of States. And coal is an internationally traded commodity so what happens in international markets can be important.

During June VEEC prices climbed to peak at $65 before falling to end the month at $61.25/certificate – still up almost 100% on a year earlier.