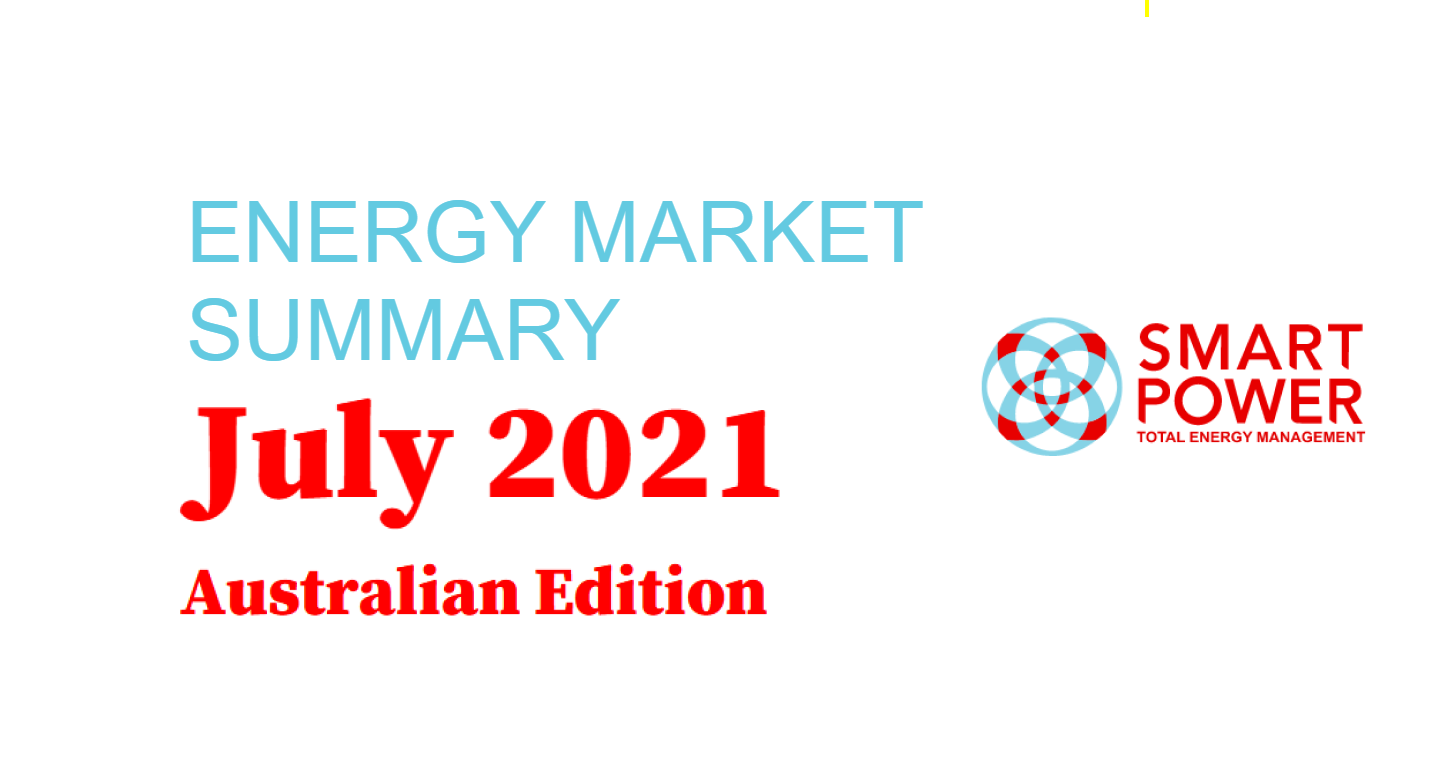 If you would like to receive our monthly Energy Market Summaries directly to your email, sign up for our newsletter here.

Spot prices reduced significantly in NSW and QLD in July as Callide power station gradually returned units to service through the month (the unit that sustained the most damage will remain out of service until the end of 2022). However prices remained more than twice what they were the same month a year ago. SA and VIC prices increased slightly from July and also remained at close to twice what they were in July 2020. High fuel costs (coal and gas) are also contributing to the higher spot pricing this year. TAS was the only State where average spot prices were lower than they were a year ago. The table below shows the average spot prices for the month and also the average peak price. The significant divergence between average spot price and average peak price highlights the impact recent events have had on volatility, with the more extreme pricing typically occurring during morning and evening peak periods.

The following graph shows the daily Average Spot Price across the last 6 months, with the current month highlighted for clarity. The increase over the last couple of months compared to previous months is clear to see.

Total generation for July increased by 5.3% from June levels due to the extra day in the month and as demand remained high with the cooler weather across all eastern States increasing heating loads.

Coal generation picked up with Callide and Yallourn units coming back into service displacing gas and hydro generation. Solar output increased by 16% and wind by 29% as we had longer, clearer days, and increased levels of wind. On July 25th a new record was set for wind generation – 6,428MW at 8pm on the Sunday evening – 308MW more than the previous record set a day earlier!

Water storage levels in Hydro Tasmania’s system reduced over the first half of July as hydro generation was working hard to make the most of high wholesale prices in the rest of the NEM. The later part of the month saw storage levels rise as greater TAS wind output forced hydro to back-off, and increased inflows resulted in lake levels rising. Very high inflows in the last week of July pushed storage to above the 5 year average, closing the month at 5,954GWh (41% full), an increase of 670GWh over the month.

Snowy Hydro’s storage levels increased for the first time in nine months finishing the month 32% of full (1,694Gl). Levels are still 11% below the 5 year average, however it is now well above the minimum levels seen in the last 5 years. Again higher inflows and reduced hydro generation contributed to the increase in storage over the month.

August to October rainfall is likely to be above median for most of Australia, however, parts of western WA are likely to see below median rainfall.

Maximum temperatures for August to October are likely to be above median for the northern tropics and south-eastern parts of Australia. For some parts of central NSW, below median daytime temperatures are more likely.

Above median minimum temperatures for August to October are very likely for all of Australia except in the south-west.

A negative Indian Ocean Dipole is underway, and large parts of the eastern Indian Ocean are warmer than average. This can favour above average winter–spring rainfall for parts of Australia. The El Niño–Southern Oscillation is neutral, but three of seven models suggest La Niña thresholds may be reached during spring. La Niña increases the chances of above average spring rainfall for much of eastern and northern Australia.

Renewable generation (wind and solar, including roof-top solar) reversed the trend of the last few months with a significant increase in July. Wind generation set a new monthly record at 2,472GWh – 411GWh (20%) more than the previous record set in September last year. Solar generation also increased leading to an overall 24% increase from June in combined wind and solar generation. The following chart shows the monthly energy produced for each of these renewable types since 2017.

CY22 contract prices increased again during July as volatility continued in the Wholesale market. CY22 prices are now up to 65% above their February lows.

CY23 and CY24 contracts also increased at the start of the month before levelling out towards the end of July.

Prices during July continued to surge, rising by a further 24% (on top of the 42.6% in June) to $12.4/GJ at the Wallumbilla Gas Hub – the highest price since February 2017. High prices were driven by high winter demand especially in the southern States, and high international prices for gas as discussed further below.

Gas storage is an important factor in the gas market, especially during the colder winter months in the southern States. The main storage facility at Iona continued being drawn down hard during July to provide for increased gas generation, as well as typically higher winter heating demand. It ended the month at 10 PJ – a 29% drop, following on from a 36% drop in June! It is now well below its lowest point for this time of year in recent years – as shown in the following chart, however there has been some levelling off over the last couple of weeks.

Like gas, the price of coal can flow through and have an impact on the electricity market. Coal, especially black coal, is often the marginal generator in a number of States. Thermal coal is also an internationally traded commodity so what happens in international markets can be important.

The following graph shows international prices for thermal coal over the last 10 years. Prices increased during July, peaking at $150USD/T before falling back at the end of the month to close at $139USD/T – a small increase over the month. Prices remain at the highest levels seen in the last 10 years

During July VEEC prices continued to climbgradually, ending the month at $65.5/certificate – up 6% over themonth, and almost 100% on a year earlier.

ESCprices also climbed during the month reaching a high of $36.1 at theend of the July – an increase of $3.2 over the month.