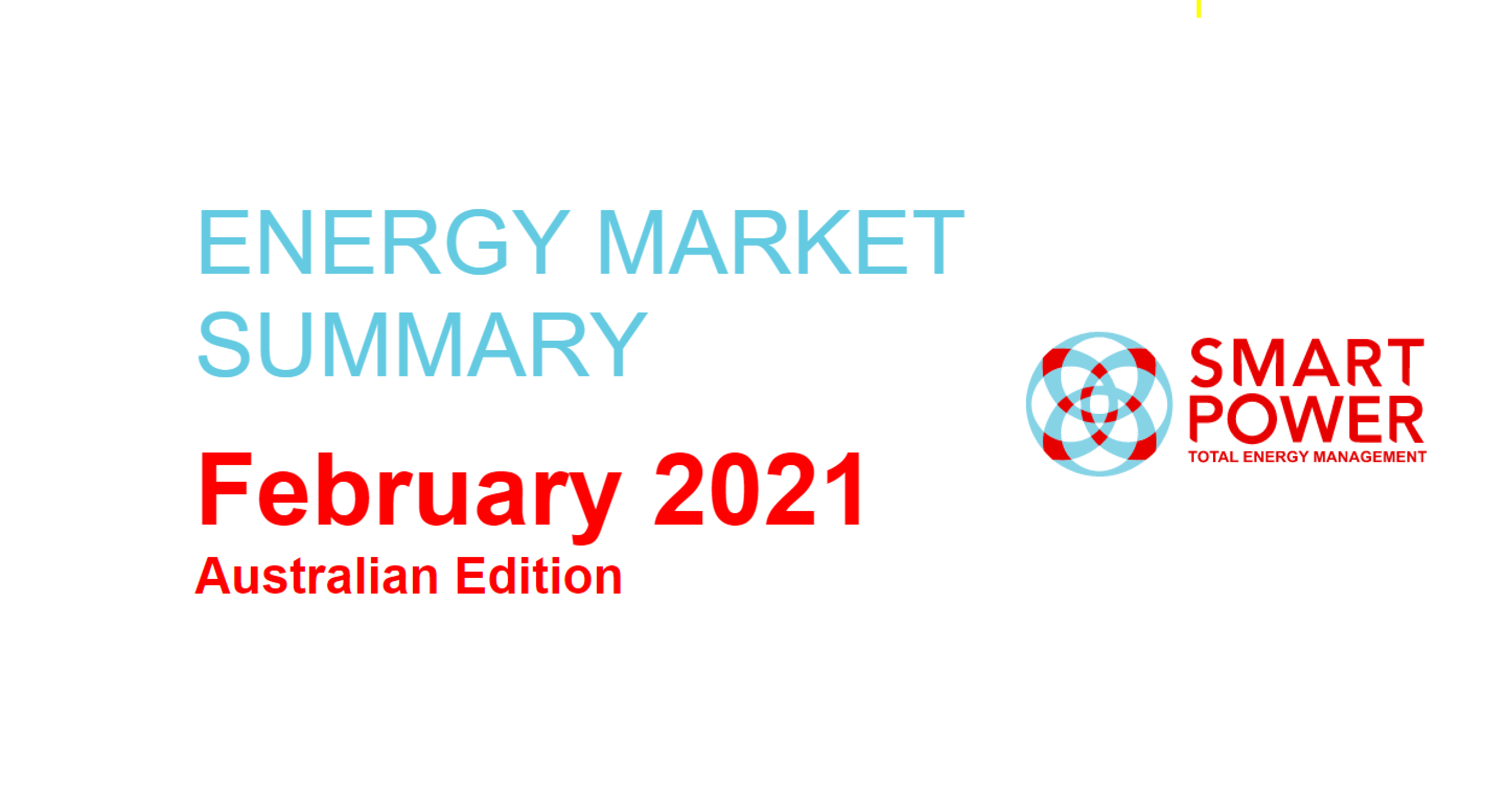 Two of the big three gentailers (AGL and Origin Energy) reported big losses, and/or asset write-downs during the month. Heavy write-downs dragged AGL into a $2.29 billion net loss for the half year, while at Origin Energy underlying earnings for the first half more than halved to $224 million. Energy Australia also noted in its full year results that it was forecasting “challenging” market conditions this year after only escaping a decline in full-year profit thanks to gains in the value of hedging contracts.

Each company pointed to low demand this year due to Covid and a milder than expected summer impacting on short-term earnings, while future price outlooks were being forced lower by increased renewables, partly driven by government policies.

On a similar theme Kerry Schott, who heads up the Energy Security Board, was reported as saying that coal fired power stations are becoming unprofitable and that they may close before the end of their rated life as new renewables come online, spurred by customer demand, low costs and government incentive programs. Premature shutdowns can’t be ruled out and may occur reasonably quickly.

The world’s largest battery will be built in the NSW Hunter Valley. The battery, with a capacity of up to 1,200MW will be up to 8 times the size of the original “big battery” in South Australia. How many hours of storage for the battery, to be located at Kurri Kurri, is yet to be determined. The Hunter battery is the latest in a series of huge storage projects announced in the state, including a four-hour, 700MW battery planned by Origin Energy at its Eraring coal power site, a $500 million pumped hydro project proposed by Canada’s ATCO near Bathurst, and battery proposals in the works at AGL Energy, Maoneng and TransGrid, not to mention the Snowy 2.0 pumped hydro mega project.

In other battery news, the Clean Energy Finance Corporation (CEFC) has committed $160million in debt financing for the Victoria Big Battery Project. The 300MW / 450MWh project based near Geelong is expected to be up and running by next summer. The project is underpinned by an 11-year contract with the Victorian government which will pay to use most of its capacity to allow increased transmission over an interconnector with NSW.

The ACCC has stated that Australia will face a gas supply shortage by 2024 unless action is taken to bring forward new supply projects. While prices had fallen the supply outlook remained bleak. The majority of 2P reserves were located in coal-seam gas fields in Queensland which required increased north-south pipeline capacity, the development of additional onshore and offshore gas fields or the construction of one or more LNG import terminals. Plans for LNG import terminals by AGL Energy, Andrew Forrest’s Squadron Energy and others have been slowed by various factors, including planning approvals and negotiations on contracts with customers.

Finally, solar households may have to pay for surplus energy exported to the grid under reforms to stop the grid being destabilised. The AEMC is considering introducing a rule which may allow distribution networks to charge for exported power during solar peak hours when the generation isn’t needed and incurs a cost to be absorbed into the system.

As can be seen in the graphs above, demand decreased compared to January due to the lower number of days in the month, and the summer drawing to a close. With a continuation of the theme this summer, demand was lower than the same time last year due largely to the cooler weather and the increase in roof-top solar. For the whole of the summer period demand was down 5.8% across the NEM compared to the summer of 19/20. VIC and QLD were down more than 4% while NSW was almost 8% lower than the corresponding period last year. SA was a staggering 11% down on last summer. Tasmania had the smallest decline being only 1% down on last summer.

The national mean temperature for February was 0.22 °C cooler than average for Australia as a whole – however it was considerably cooler than January 2020 which was the 10th highest on record (almost 1°C above average).

Mean maximum temperatures for February were cooler than average for most of Western Australia, the inland north-west of the Northern Territory, much of inland South Australia, most of New South Wales away from the north and west, and central to eastern Victoria. The mean maximum temperature for February was warmer than average for most of the southern half of Queensland, stretching along the coast south from Mackay, in a narrowing band through the inland south then covering much of the Channel Country.

The mean minimum temperature for the month was above average for most of Queensland, the east and north of the Northern Territory, parts of the northern Kimberley and pockets of the northern coast of Western Australia. Mean minimum temperatures were below average for areas of western, interior, and south-eastern Western Australia, much of South Australia away from the west and the coast, adjacent parts of north-west Victoria and south-western New South Wales, and an area of eastern New South Wales inland of the ranges.

A few stations in Western Australia and South Australia had their coldest February day (lowest maximum temperature) on record during the first week of the month.

February rainfall was above average for Australia as a whole.

Rainfall for the month was above average for Western Australia except the Kimberley, the Top End of the Northern Territory, much of New South Wales except the southern half of the coast and in the west, north-eastern Victoria, and much of Tasmania.

Rainfall for the month was below average for parts of Queensland's east coast south of Townsville, much of western News South Wales and western Victoria, and parts of the Kimberley coast in Western Australia.

March to May (autumn) rainfall is likely to be wetter than average for large parts of eastern Australia.

Minimum temperatures for autumn are likely to be warmer than average for most of Australia, except for parts of the south and west.

The current La Niña is forecast to end during autumn. La Niña typically increases the likelihood of above average rainfall across eastern Australia during early autumn.

Renewables (not including roof-top solar) again accounted for more than 20% of total generation. Hydro, coal and solar increased their share while wind and gas declined.

Gas generation eased again in February dropping 15% on January. Gas generation continues to be considerably lower than in the corresponding period of 2021 by around 54%. Generation decreased significantly in NSW (96%) and TAS (85%) – both on small volumes, but dropped in all States.

Water Energy storage levels in Hydro Tasmania’s system decreased slightly through February but remained well above the 5 year average. Energy in storage at month end was 5,504GWh or 38.1% of full storage.

Hydro Tasmania has been utilising stored energy, generating at times of high wholesale prices and storing energy when prices are low. Summer is typically a time of greater price volatility so hydro operators would have been looking to benefit from that volatility that didn’t occur as much this summer due to the milder than usual weather. They would also have been aware of the forecast higher than average rainfall this La Nina summer that would have impacted their view on appropriate levels of storage to maintain.

Snowy Hydro’s storage levels dropped for the 4th month running finishing the month at 8% below the 5 year average. However this level was still 24% above where they were 12 months ago.

Renewable generation (wind and solar) dropped in February due to less days in the month and reduced wind generation. The following chart shows the monthly energy produced for each of these renewable types since 2017.

Volume weighted prices for solar dropped again in all States. Prices are down nearly 50% in NSW compared to 12 months ago while in SA and VIC the reduction is even more dramatic (95% and 70% respectively).

With significantly more new renewables committed, as shown in the following table from AEMO (unchanged from last months report), we expect this to put increasing downward pressure on prices and to increase spot price volatility.

The following graph shows the daily Average Spot Price across the last 6 months, with the current month highlighted for clarity.

LNG netback prices returned to some sense of normality during February as the northern hemisphere winter came to an end and supply constraints eased. Prices ended the month at $8.56/GJ - less than half their January high. The futures market shows expectations are now that average prices for 2021 are close to $8/GJ (compared to $9/GJ last month) and less than $7/GJ in 2022.

CY21 contracts continued to drop sharply during February due to the low spot prices in that month. Summer has been the season with the highest spot prices and the greatest volatility over the last few years, so getting through the summer without high prices has dramatically de-risked the rest of the calendar year.

The low February prices also fed through into CY22 & CY23 significant falls in all States. The greater risk assigned to NSW is clearly seen in both years with prices about $15/MWh higher than all other States.

We have just started to publish CY24 and we await to see how the trends develop. All pricing for CY24 is questionable at the moment with low volumes and liquidity this far out.

The LGC market fell during February with decreases in all years. Trades for 2025 certificates occurred for the first time.

VEEC activity remained very strong with 688,300 new certificates registered. Prices continued to increase over the month reaching $50.00 at one stage. However an announcement by the Essential Services Commission (ESC) late in the month reversed the trend and prices finished the month at $45.50 which was a decrease of $3.40 over the month.

This document has been prepared for information and explanatory purposes only and is not intended to be relied upon by any person.  This document does not form part of any existing or future contract or agreement between us.  We make no representation, assurance or guarantee as to the accuracy of information provided.  To the maximum extent permitted by law, none of Smart Power Utilities Ltd, its related companies, directors, employees or agents accepts any liability for any loss arising from the use of this document or its contents or otherwise arising out or, or in connection with it.  You must not provide this document or any information contained in it to any third party without our prior consent.