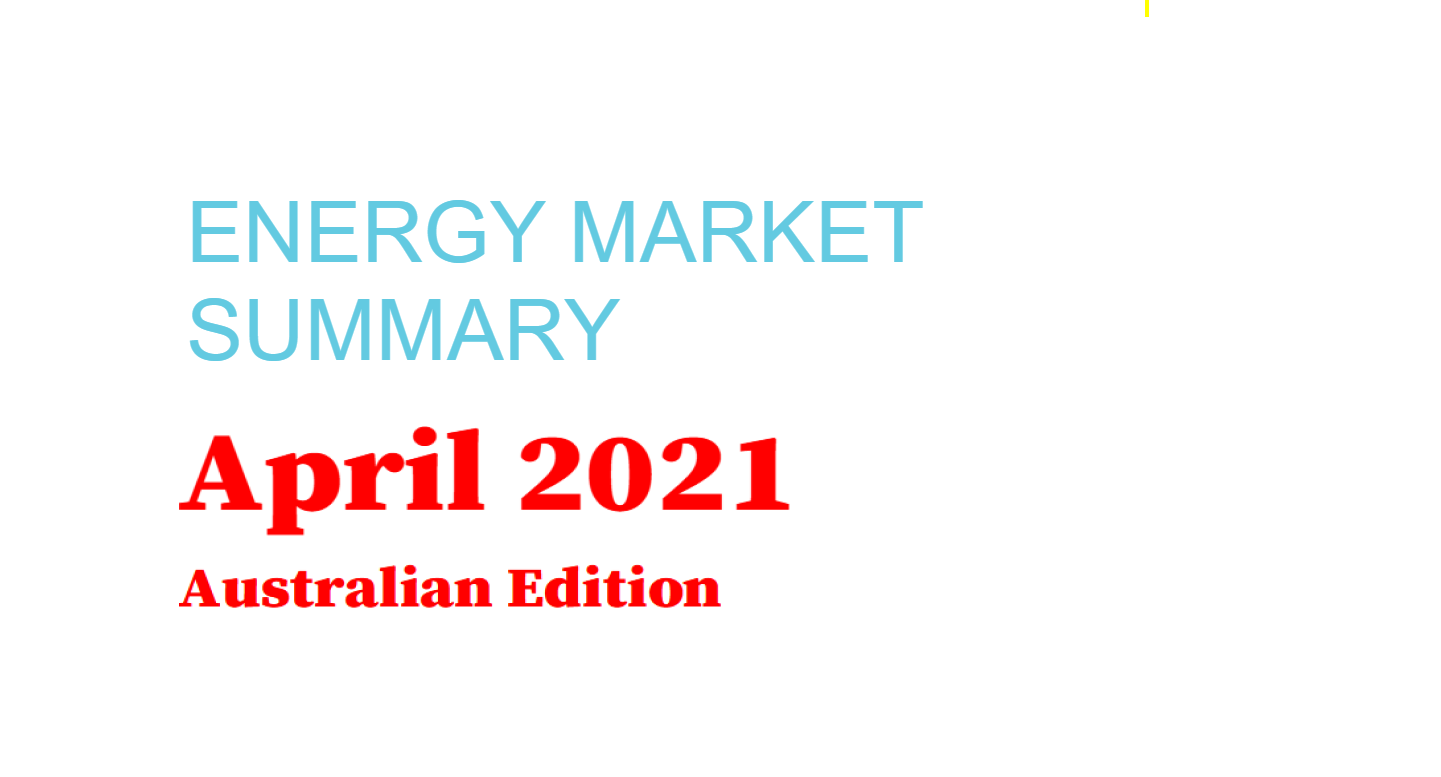 Victorian electricity prices collapsed to the lowest point since the beginning of the NEM in 1998 in the March quarter, dropping 75% on the same period last year because of low demand, mild weather and increasing renewables. NSW prices were a close second dropping 64% on the same quarter last year.

The Australian Energy Regulator (AER) has published Evoenergy’s 2021–22 electricity network pricing proposal, with ACT’s electricity network charges set to increase substantially. Under ACT legislation, Evoenergy is required to recover jurisdictional charges from the ACT community by passing the costs through to all ACT energy retailers. These include costs associated with the administration of the ACT Government’s large-scale feed-in tariff scheme for the next financial year (part of the ACT Government’s 100 per cent renewable energy target). Evoenergy’s Chief Executive Officer, John Knox, said in this instance the sustained decrease in wholesale electricity prices for around the past 12 months has been the driving factor behind the increase. “What we’ve seen over the past year is a significant drop in wholesale electricity prices which has increased the payments Evoenergy has had to make under the scheme,” Mr Knox said.

Technologies such as Powertracer, developed by Australian start-up Enosi Energy, are vital to achieving ambitions for round-the-clock 100 per cent renewable energy that Google, Microsoft and more recently IBM have embraced, says Enosi chief executive Steve Hoy. Mounting pressure on companies to reach 100 per cent renewable energy without the use of carbon offsets is playing into the hands of the Australian firm, which has kicked off a Series A funding round to take its 24/7 “energy matching” technology to overseas markets.

Australia does not need coal-fired power stations to keep electricity bills down, but rushing to 100 per cent renewable energy will be “expensive” without major technology breakthroughs to provide back-up power during long winter wind droughts. These are the findings from a new Gratton Institute report.

In a month of high profile energy industry resignations, the CEOs of AGL, Energy Australia and Stanwell all announced they were standing down from their roles.

Queensland’s coal fired power stations have been hit hard by the drop in power prices. They have been forced to write down the value of their assets as well as halving the dividend being paid to their owners (the State Government). However the State Government has stated that there are no plans for early retirement or even temporary mothballing of any capacity as they attempt to balance the seemingly contradictory ambitions of transitioning to renewables while also supporting the Queensland coal industry.

The Energy Security Board (ESB) has proposed 3 models to ensure there are enough megawatts in the grid to keep the lights on as the share of variable renewables grows. The three models – an operating reserve mechanism; an expanded Retailer Reliability Obligation or decentralised capacity market; and an expanded Retailer and Emergency Reserve Trader scheme – have been shortlisted by the ESB before it decides on a final option to put to energy ministers in July next year.

As can be seen in the graphs above, demand decreased compared to March in all States apart from Tasmania. Compared to previous years, however, demand was above 2020 levels when demand was depressed due to Covid lockdowns. Overall demand was closer to pre-Covid “normal” with consumption in line with 2019 levels.

The national mean temperature for April was 0.21 °C warmer than average for Australia as a whole.

Mean maximum temperatures for April were warmer than average for most of the southern half of Western Australia and South Australia, extending into north-west Victoria and south-west New South Wales, around the coast of far northern Australia, and in north-east Tasmania.

The mean minimum temperature for the month was warmer than average for most of western and southern Western Australia, northern Queensland, and most of the southern half of Tasmania.

The mean minimum temperature for April was cooler than average for a large area between the north-west and the south-west of the country. This included New South Wales, southern Queensland, northern Victoria, large parts of eastern and northern South Australia, the south-western half of the Northern Territory, and the Kimberley, eastern Pilbara, and north of the Interior District in Western Australia. Nights were particularly cool in inland south-eastern Australia, with large parts of inland New South Wales 2 to 3 degrees below the April average. A large number of sites in New South Wales and a few in South Australia had their coolest April mean daily minimum temperature on record, or the coolest for at least 20 years. Cool nights contributed to some sites in New South Wales having their lowest April mean temperature on record, or for at least 20 years.

April rainfall was well below average for Australia as a whole. For New South Wales it was the eighth-driest April on record and for South Australia it was the seventh-driest.

Rainfall for the month was above average for Queensland's Cape York Peninsula and adjacent northern Queensland, and around most of the west and north-west coast of Western Australia.

May to July rainfall likely to be above average for the southern half of the mainland, but areas in the south-west and south-east have roughly equal chances of above or below average rainfall. Western Tasmania and northern tropics are likely to have a drier May to July.

Maximum temperatures for May to July are likely to be above average for most parts of Australia.

Similarly, minimum temperatures for May to July are likely to be above average Australia wide.

The El Niño–Southern Oscillation is neutral, as are most other climate drivers.

Total generation for April decreased by 4.9% from March levels due to the shorter month, the Easter Holiday and cooler weather.

Renewables (not including roof-top solar) dropped this month, especially solar and wind, though this was balanced somewhat by an increase in hydro generation. Coal dropped 5% in line with the overall drop in demand, while gas use increased for the second month running.

Gas generation increased again in April, rising 2% on March levels. For the first time in many months gas generation was greater than it was for the corresponding period of 2020, being 5% more than the same month last year. Generation increased in all States apart from QLD (dropped by 29% from March level), though most significantly in TAS (322%) and VIC (230%) – both on small volumes. SA also had a significant increase (34%) on much larger volumes.

Water Energy storage levels in Hydro Tasmania’s system increased at the start of April but then dropped to end the month at much the same level as it started, still well above the 5 year average. Energy in storage at month end was 5,196GWh or 36.0% of full storage.

Hydro Tasmania has been utilising stored energy, generating at times of high wholesale prices and storing energy when prices are low. Hydro generators worked hard toward the end of April when wind generation was low and wholesale prices were escalated at both morning and evening peaks.

Snowy Hydro’s storage levels dropped for the 6th month running finishing the month at 10% below the 5 year average and approaching minimum levels seen in the last 5 years.

Renewable generation (wind and solar) reduced in April. Wind generation was again low indicating a relatively calm month while solar generation dropped as we moved into shorter, less sunny autumn days. The following chart shows the monthly energy produced for each of these renewable types since 2017.

Total generation from these 3 sources was 3,285 GWh in April - the lowest renewable generation since July 2020, but still almost 16% more than 12 months ago.

Volume weighted prices for solar increased slightly in April in all States apart from QLD. All States were close to $30/MWh on average. However this was against a backdrop of significantly higher spot prices as discussed in following sections. The resulting markdown that solar achieved compared to average spot prices was between 36% (NSW) and 52% (QLD). Both SA and VIC were at 42%.

With significantly more new renewables committed, as shown in the following table from AEMO (unchanged from last months report), we expect this to put increasing downward pressure on prices, to increase the level of markdown applied to both solar and wind generation, and to increase spot price volatility.

Spot prices increased significantly in all States in April apart from TAS and SA where prices dropped. SA had a large price spike in March which distorted the average number for that month resulting in the decline this month. As the following chart shows average daily wholesale prices increased during the month as wind generation fell away. This resulted in high pricing occurring on a daily basis in both the morning and afternoon peak demand periods for most of the second half of the month and across most States.

The following graph shows the daily Average Spot Price across the last 6 months, with the current month highlighted for clarity. The increase over the month compared to previous months is clear to see.

Gas storage is an important factor on the gas market, especially heading into the colder winter months in the southern States. The main storage facility at Iona currently has more gas stored than at any time since it started to be recorded – as shown in the following chart.

Like gas, the price of coal can flow through and have an impact on the electricity market. Coal, especially black coal, is often the marginal generator in a number of States. And coal is an internationally traded commodity so what happens in international markets can be important.

The following graph shows international prices for thermal coal. It can be seen that after a slump in pricing during the pandemic, prices have returned to close to levels last seen in 2019. Over the last month prices have stayed reasonably stable around the $90USD/T level.

CY22 contracts increased during April as volatility came back into the Wholesale market and traders factored this into Futures pricing.

CY23 and CY24 also showed increases as the market continues to rebound from the lows of February. The greater risk assigned to NSW is clearly seen in all years with prices about $10 -15/MWh higher than all other States.

The LGC market rose during most of April across all years.

VEEC activity remained very strong with 750,150 new certificates registered. Prices increased dramatically again over the month reaching $60.50 at one stage before dropping to finish at $58.15, an increase of $6.40 over the month.